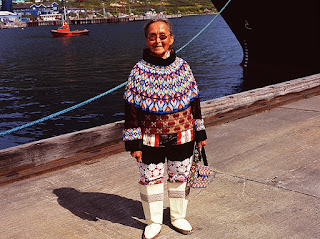 In 2006, I was invited to participate in a Zegrahm expedition sponsored by the Harvard Museum of Natural History, The Nature Conservancy, and the World Wildlife Fund. I was to lecture aboard the ship, and to participate onshore, when visiting Inuit communities to discuss the effects of climate change on their lives. The trip would travel along the coast of southeastern Greenland, crossing the Labrador Sea, to the northwest coast of Labrador, and the southwest coast of Baffin Island.
~Robert Glenn Ketchum 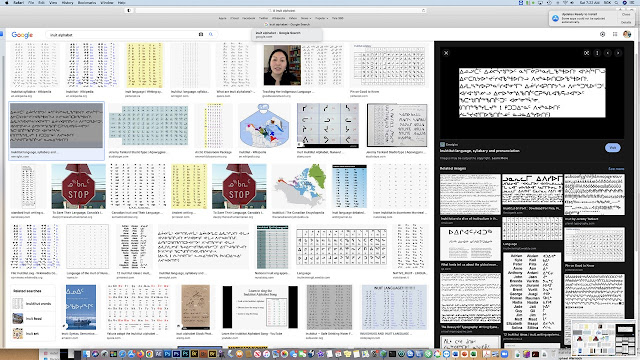 GREENLAND, LABRADOR, and BAFFIN ISLAND:  A Climate Change Research Expedition in the North Atlantic, #91
GLB #91:
We arrived in the harbor of Iqualuit precisely at the highest tide, so our large party, and all of our gear, were loaded into numerous Zodiacs and taken ashore, allowing our clipper to retreat to deeper water before the tide turned. It was still morning, and our flight home did not leave for several hours, so a bus was arranged to take our luggage to the airport, and we were free to wander about the town. Hysterically, we had street maps to help us find points of interest, but they were useless. Not only were the street names unintelligible, such as Kangiqsliniq, or Niaqunngusiariaq, but all the signage was written in Inuktitut), the Inuit alphabet, which as you can see here is quite bewildering. A humorous several hours was had by all.
photograph(s) © copyright, ROBERT GLENN KETCHUM, 2022,
@RbtGlennKetchum @RobertGKetchum @LittleBearProd #LittleBearProd
Follow Robert Glenn Ketchum's Photographic Activism Online:
LINKEDIN:  linkedin.com/in/RbtGlennKetchum
FACEBOOK:  facebook.com/RobertGlennKetchum
FACEBOOK:  facebook.com/NoPebbleMine.photos
TWITTER:  twitter.com/RbtGlennKetchum
TWITTER:  twitter.com/RobertGKetchum
PINTEREST:  pinterest.com/LittleBearProd
SOCIAL MEDIA by #LittleBearProd:  LittleBearProd
Wach Gallery:  Wach Gallery
___________________________________________________
CONTINUE READING THIS POST »
Posted by LittleBearProd at 10:00 AM No comments: