In 1993, I had an exhibition at the Georgia Museum of Art in Athens, hometown of the band R.E.M. Apparently several members of the band, including Michael Stipe, their iconic lead singer/songwriter, attended the exhibit during the course of its run appreciating both my work AND the fact that I created it on behalf of conservation advocacy.
Surprisingly, they went further by contacting me directly to express their support of what I was doing with my art, and they forwarded me some uniquely packaged CDs of their albums with handwritten notes. I had always loved R.E.M.'s music, but was amazed that such a hugely popular group found the time to reach out in this fashion. Over the years, I also received newer releases from them as they became available.
I am sorry to learn that they have chosen to quit the business, but it is great to know they do it remaining friends with each other and by mutual decision. Not all rockers want to tour forever, being "on-the-road" is a grueling exercise. I would like to wish them the best with the rest of their lives and to thank them for being a GREAT band that not only delivered ROCK, but did so with intelligent, sophisticated lyrics.
Oh yes, what are my favorite songs? It is impossible not to like their "classics": "Everybody Hurts", "Losing My Religion", "Man On The Moon", "It's The End Of The World", and "Fall On Me" to highlight a few. However, the songs that resonated in me for other reasons are "Stand" because of its content/intent and "Crush With Eyeliner" just because IT IS ROCK; ­ wicked guitar!
Posted by LittleBearProd at 2:37 PM No comments:

Since 1986 noted nature photographer and environmental activist Robert Glenn Ketchum has collaborated with Master Embroiderer Meifang Zhang to create embroideries based on his photographs. As Director of the Suzhou Embroidery Research Institute (SERI) and then founder of the Suzhou Embroidery Art Innovation Center (SEAIC), Meifang Zhang occupies a prominent place in the development of Chinese traditional embroidery. The works in this exhibition are some of the latest pieces created in that collaboration. Zhang says, “Robert is bringing forth new ideas in every work of his photographic art, unbroken transformations, unbroken emergence of new features. How can our embroidery take the features of photographic works, adopt the embroiderers’ best vocabulary, our colors, our needlework, our methods regarding the relationship of full and empty, to express those pieces in the best way?” Since the first small, tentative steps in the collaboration, Ketchum’s enthusiasm, confidence and knowledge have combined with Zhang’s skill, persistence and insight to create a stunning new embroidery that represents at once the retention and growth of tradition. 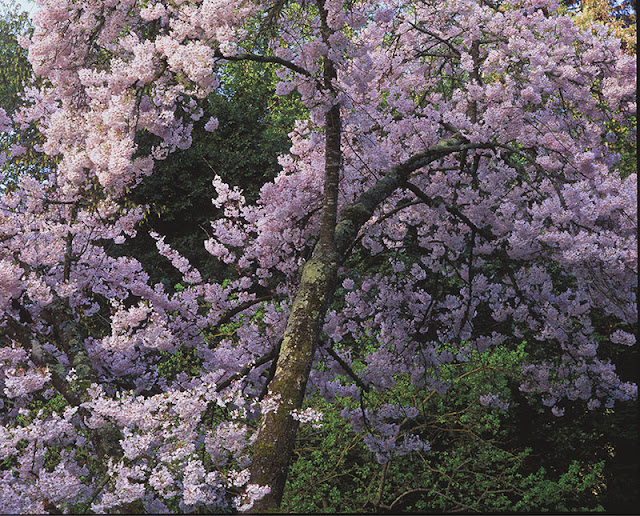 One of the marks of the success of the collaboration has been its continued development. China in 1986 was only a few years past the end of the Cultural Revolution: the nation was rapidly opening up but there was no solid assurance that the suspicions and political attacks were over. For Meifang Zhang, the opportunity to open a collaborative project with a foreigner was something to consider carefully. Politically there was some worry; but more critical was Zhang’s uneasiness with Robert’s project itself. While Zhang had worked with many Chinese artists, they had all been painters. She was not sure that her group could produce a piece that this American photographer would be satisfied with. Her group at that time, the Suzhou Embroidery Research Institute (SERI), was a prestigious state work unit whose pieces were often used as state gifts or in government buildings.  Photography was not even considered a fine art in China, while embroidery like SERI’s most definitely was. The first collaborative piece, Snowfall was a modest, relatively small piece to see whether embroidery was right for Robert’s vision. Robert’s happiness with the finished piece opened the collaboration.
Over the next twelve years, Robert and Meifang explored the ways that embroidery could express what Robert captured in his photographs. Pieces got bigger and the exploration of color and texture yielded remarkable works. The work of those first dozen years was exhibited (with a catalog) at UCLA’s Fowler Museum of Cultural History in 1998 to great acclaim. Each piece expressed the original photograph in a way that actually conveyed more surely the effect of the original. The standing screen embroidery The Beginning of Time (in this exhibition as well) was more than a restatement of the original photograph, it was a conversion of photographic vocabulary to the language of embroidery and Chinese painting: almost blank areas made misty transitions to more defined areas and yet the embroidery made a strong contrast between foreground and background. The colors and subtle shadowing of the photograph emerged more striking than ever. The Beginning of Time ushered in a new direction in the collaboration, one that would move the works away from literal descriptions of nature to a closer exploration of Robert’s core supra-real vision.
Speaking of one of her conversations with Chinese artist Wu Guanzhong, Zhang said, “You can’t repeat tradition… repeat, repeat… at the foundation of the tradition there’s no development, no raising up, no advance, so you’re just at zero.”  You can say the tradition of Chinese embroidery begins about a thousand years ago when court painters began to collaborate with court embroiderers, a collaboration that lent embroidery the prestige it continues to enjoy to the present day. Collaboration remains an important part of the tradition, “I also collaborate with different artists. I feel all have different influences, and each artist’s collaboration has its own characteristics. In the collaboration with Robert, one characteristic is that he is an American artist, the rational concepts of an American artist’s art matured on American soil, right? First, the colors of his photographic art as I’ve said has a forceful impact, because the colors of his image are a great change from the colors of traditional embroidery. In this process, how to combine my embroidery with photography art? Much of the embroidery in the exhibition uses random- stitch embroidery. Developed in the late nineteenth century, the use of stitches which vary in direction, length and color allows the artists to build up layers of shading which traditional embroidery, made up of dense areas of parallel stitches or knots, could not achieve. Practiced almost exclusively in Suzhou, random stitch embroidery is an early example of the ways that tradition has grown in Suzhou. 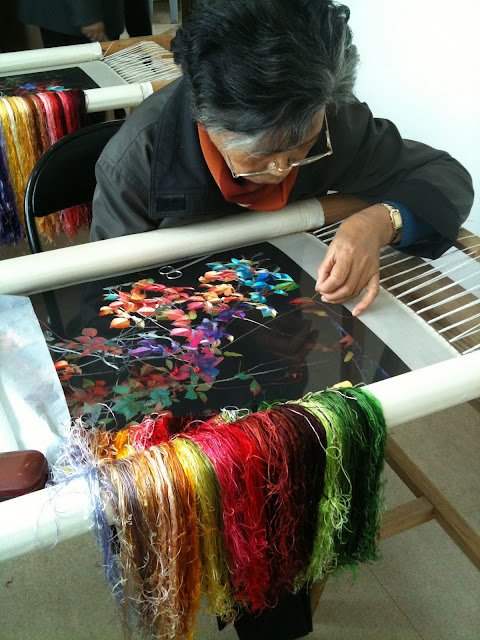 Interview transcriptions were done by Rain Xie and Gu Yingyi.
Posted by LittleBearProd at 4:00 AM No comments: 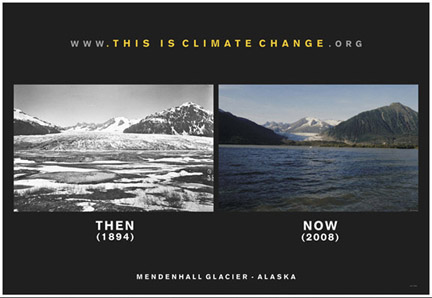 Many of the 50,000 passengers passing through Reagan National airport in Washington DC daily will now see a different kind of advertisement in the concourse:  a new public education initiative has installed a photographic billboard of ongoing climate change today.
This Is Climate Change, an educational project of the Del Mar Global Trust, put up the first of a series of large backlighted photographs yesterday, featuring my time series view of the shrinking Mendenhall Glacier in Alaska.  As part of World View of Global Warming, I rephotographed a 1894 image in 2008 to show the visible effect of global warming on the glacier near Juneau.
This Is Climate Change project will place photographs and other strong visuals in public locations to show that climate change is real and is currently impacting the United States.  Despite the overwhelming scientific findings on the reality of man-made climate change, a 2010 Pew Research Center poll found that only 59% of Americans believed that there was solid evidence that the earth was getting warmer.  “The numerous scientific reports and publications affirming that climate change is real and human induced have not seemed to sway public opinion” explains project director, Elena Marszalek, in a press release. “We thought an approach that focuses on changes which are already affecting the U.S. would make climate change a more relevant issue to the American public.” 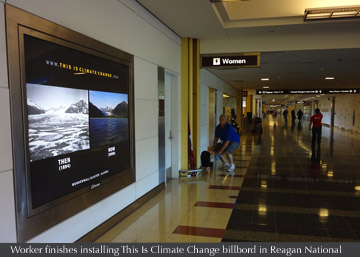 The Del Mar Global Trust chose to collaborate with me because of my celebrated series of views of affected landscapes, part of my 11-year photojournalistic project to increase climate science literacy.  The  'This Is Climate Change' educational project will be synergistic with other programs to re-emphasize the science of climate change and the implications of the rising amount of greenhouse gases in the atmosphere.  The backlighted photographic billboard will be in Reagan National airport for a year; other displays of global warming in other public locations, and further collaborations, are planned.
"Gary Braasch has been one of the most devoted artists... and his epic global treks to ravaged coastlines, sinking islands, and dwindling ice sheets give us some of our most powerful images of our new reality,"  wrote Bill McKibben in The Global Warming Reader (Bill is not affiliated with this project but is now in Washington leading civil protests against a proposed tar sands oil pipeline from Canada)
For more information, please see the "Climate Photo of the Week"
http://www.worldviewofglobalwarming.org  and http://www.ThisIsClimateChange.org
Posted by LittleBearProd at 7:00 AM No comments:

CLICK TO READ THE ARTICLE > Robert Glenn Ketchum, 'In Defense of the Natural World'

CLICK TO READ THE ARTICLE > Amy Gulick, 'Salmon in the Trees'

CLICK TO READ THE ARTICLE > Patricio Robles Gil, 'The Passion and Essence of Nature'

CLICK TO READ THE ARTICLE>  Robert Glenn Ketchum, 'Nature’s Tireless Advocate: A Conviction of the Heart'