Traveling in CHINA Since 1985 by Robert Glenn Ketchum

During the reign of Mao (1949-1976), China was a closed country. China in the 1980’s was 80% rural, with no outside visitors, particularly from the West. When China opened to travelers, the Chinese government placed severe limitations on who was allowed to enter the country. Earthwatch was one organization that allowed foreigners to visit China without going through too much red-tape. These photographs are a first glimpse into China in the mid-1980’s by world-renowned Conservation Photographer Robert Glenn Ketchum. 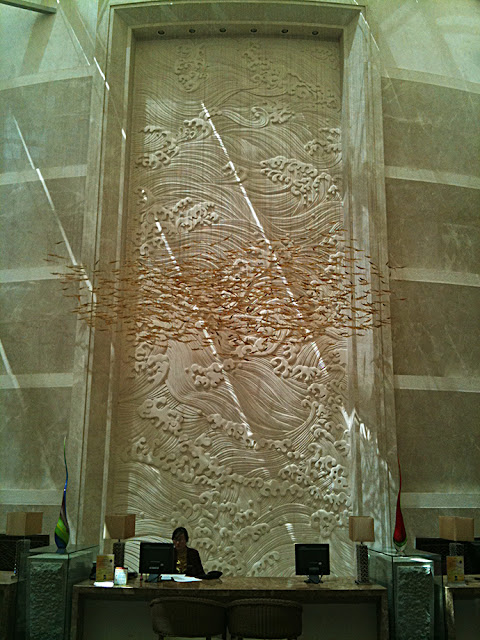 Traveling in China Since 1985, #163
CHINA #163:   Where once there were rural farming communes, there were now destination resorts. This is the lobby of the hotel in which we had lunch. You are looking at some corporate scale art here: the carved marble on the wall clearly represents waves. That other "stuff" - the "little brown things" - those are individually carved fish on fine strings hanging from the ceiling in front of the wall. When doors open in various parts of the vast lobby, breezes cause the fish to change direction and "swim in schools." The meal was equally over-the-top. You will see many modern and exotic hotels and other architecture in my two blog posts:  Shanghai - Oz of the Orient and Suzhou - 1985 to Present, so I will go no further here. In fact, I am ending this particular blog which I hope you have enjoyed AND I am launching a new blog to replace this - not about China, but about the beginnings of my career. LIMEKILN CREEK: Where It All Began will drop the first Tuesday of 2016. The story starts with a drive home from the @MontereyPopFest in 1967 that includes a camping trip in the redwoods, and a life changing realization about myself and my work. It is a story about nature, photography, AND self-discovery. I hope you will follow this blog.
photograph(s) © copyright, ROBERT GLENN KETCHUM, 2015, @RbtGlennKetchum @LittleBearProd #LittleBearProd #China #Suzhou

I am very proud to be a Fellow of the International League of Conservation Photographers (@iLCP), an organization that is dedicated to furthering environmental and cultural conservation through photography.

CONTINUE READING THIS POST »
Posted by LittleBearProd at 9:00 AM No comments: