For some time now I have tracked earthquake and volcano activity in this Climate Change portion of my blog. I do this because NASA data suggests that both Greenland and Antarctica are "moving" (known as isostatic rebound) as the ice weight melts off of them, and if it is true that one of the largest islands in the world, and THE largest continent start to flex, they will shift tectonic plates worldwide setting off earthquakes and increasing volcanic activity. Clearly, this has just been personal speculation on my part, and part of the beauty of being able to blog.
Now it seems the science community may be taking more notice of this possibility. I await their conclusions, but I am buying earthquake preparedness kits for my whole family now and not expecting the empirical evidence any time soon.
This summer when I was teaching in Jackson Hole, WY, we were rocked by a large swarm of quakes of small quakes (40 or more/4.0 magnitude) at a time when no local I spoke with can ever remember experiencing a quake. On September 26, Nebraska was rattled by a small 3.0+ in an area earthquake activity is considered extremely rare.
Unfortunately, these may just be "awakening" signs. In the winter of 1811-1812, The New Madrid fault zone in SE Missouri produced three of the strongest earthquakes to ever strike the continental U.S. And, more ominously, scientists have discussed for years the danger of the Yellowstone Basin "waking up" because Yellowstone IS an ancient volcano, and a prehistoric Yellowstone produced the largest and most cataclysmic volcanic eruption in the evolution of North America.
If a changing climate triggers these kinds of activities and events, I would like us all to consider the concept of keeping the climate as stable as possible, as soon as possible, please! I don't give a damn about whose fault these changes are, we need to address these changes.
The philosopher, Thomas Huxley, said, "Human existence is a race between intelligence and extinction".
Darwin's theory has also been misstated. He actually said that it is not the smartest, nor the fittest, but those that will adapt the most quickly that will survive.
The race is on. I hope those in the human population that don't think it is, wake up and start running. We need everybody thinking about this, and for human creativity to rise to the occasion and address these changes in our environment or humanity will no longer be a relevant species.
~ Robert Glenn Ketchum
#rgk
#lbp
Posted by Saucy Girl at 10:21 AM 2 comments:

If you're in the Washington, D.C. area November 6-13, 2010, be sure to take-in the "FotoWeek DC 2010 Festival".  Myself and several of my Fellows of the International League of Conservation Photgraphers (iLCP) will be showcased in the NightGallery.  Our select group includes myself, Robert Glenn Ketchum, Daniel Beltrá, Amy Gulick, Thomas P. Peschak, Cristina Goettsch Mittermeier, Paul Nicklen, Thomas D. Mangelsen, Garth Lenz, and Brian Skerry.  Click on their names to view their websites, and see below for photos from the NightGallery.
NightGallery welcomes a world-renowned team of curators: James Wellford, the senior photo editor at Newsweek magazine, will curate the special documentary program entitled 'Projections of Reality'; Andy Adams, editor of flakphoto, and curator Larissa Leclair will shape the fine art projections entitled '100 Portraits / 100 Photographers'; and Cristina Mittermeier, founder and president of the International League of Conservation Photographers will curate 'Life Lives Here.' *
* * * * * * *

ABOUT NIGHTGALLERY:
To reach the greatest range of viewers, the curated photographs will rotate through various projection locations. Viewers can obtain a program guide to the themes, times, and sites for each projection series.
NightGallery projections can be enjoyed at many locations throughout Washington, including the exteriors of the Corcoran Gallery of Art and College of Art + Design, Newseum, Holocaust Museum, American Red Cross, National Museum of the American Indian, Human Rights Campaign Dupont Circle, House of Sweden, and the FotoWeek DC Satellite on 3333 M Street.
* * * * * * *
ABOUT FOTOWEEK DC:
Over the past three years, FotoWeek DC has skyrocketed as one of the world’s premier photography festivals. Tens of thousands of fans have come to expect the unexpected: colossal photo projections on the walls of the city’s famed architecture..., all-night photo experiences..., evocative exhibitions of award-winning images..., lectures and workshops by internationally renowned photographers.
Innovation. Creativity. Expansion. Transformation!  That’s the power of photography.  That’s the point of FotoWeek DC.  And it’s Everywhere You See.
* * * * * * *
* LIFE LIVES HERE, curated by Cristina Mittermeier
Statement:
"Life Lives Here... and nowhere else in the universe. These projections by Fellows of the International League of Conservation Photographers will shine a light on some of our planet's most beautiful and precious natural resources... and the threats facing them. We hope they will help connect-the-dots between cause and consequence on all our environmental decisions, and lead us to understand how every action has an effect on our planet, and all life on it."
~Cristina Mittermeier
Robert Glenn Ketchum:  "No Pebble Mine:  Wild Salmon of Bristol Bay Forever":

Garth Lenz:  "The Alberta Tar Sands:  A New Addiction to the Most Toxic Oil":
Brian Skerry:  "3 Degrees of Japan's Seas":

Posted by Robert Glenn Ketchum at 9:00 AM No comments:

Posted by Robert Glenn Ketchum at 8:25 AM No comments:

Think before you vote.

Before you vote, you might consider what my Chinese friends think of this election. As most of you know, I have been creating textiles in China since the early 1980's. This long working relationship with these Suzhou guild artists has also become an unusual friendship that is remarkably frank and honest considering the difference in our cultures. It may be worth noting what they perceive about this forthcoming election.
Basically there are two points: the lesser point is that the Chinese are amazed that so many people that know nothing about how the government is run have succeeded in getting on the ballot. This amazes them, but in its own weird way, it is proof to them of how democracy works. As they see it, our democracy has succeeded and failed simultaneously. Because it has succeeded, our country is now perfectly divided down the middle (a perfect democracy/the promise of the dao) and now nothing will ever be accomplished because of that division.
Point two is that the rise of the Tea Party is seen as a GREAT boon to the Chinese who predict that once the Tea Party candidates and similarly sympathetic Republicans are elected, they will throw our government systems into complete chaos, choking off any hope we may have for an economic recovery and retarding our industrial output, ALL TO THEIR ADVANTAGE. As one of my friends pointed out, after the election the "new" politicians will try to stifle global warming investments, so this leaves China with NO manufacturing competition in this market and lets them take TOTAL control of much of the future market technology directed at climate change. As our political body continues to deny climate change, events related to climate change will continue to get worse. When we finally wake up, it will be to late to invent anything, so we will just buy it from the Chinese.
It was pointed out to me that this will be a HUGE change in the world market. My friends feel the US has always led the world with its inventions. China may have manufactured for us, but the US invented most of the necessary products. Now they see themselves as inventing AND manufacturing the products, cutting us entirely out of the production market and reducing us to being dependent on technology they bring to us.
Think before you vote. The outcome may change life as we know it in the US.
~Robert Glenn Ketchum 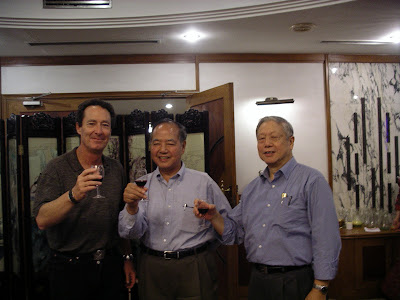 
I find it curious sometimes how some things dove-tail. A new ad was just brought to my attention that depicts a less-than-subtle approach to America's growing debt obligation to China.
The ad is produced by the conservative group, 'Citizens Against Government Waste', and it has attracted much attention already. In fact, Wang Baodong, a spokesperson for the Chinese Embassy in Washington, said that it's "unreasonable" to blame America's economic woes on China and "despicable" to incite anti-China sentiment.
Watch the video here:

And just in case the video is pulled from online, for whatever reasons, here is the synopsis:
The ad called "Chinese Professor," is set in "Beijing, China 2030 AD." It shows a lecture hall with a professor speaking in Chinese. The students carry futuristic tablets that make the iPad look clunky. The ad contains subtitles and starts with the professor asking, in Chinese, "Why do great nations fail? The Ancient Greeks...the Roman Empire...the British Empire...and the United States of America." Students gaze up at a holographic screen that shows images of the four superpowers. "They all make the same mistakes, turning their back on the principles that made them great," continues the professor. He goes on to say that America tried to "tax and spend" its way out of a recession, including a health-care overhaul -- all of which led to massive debt. "Of course, we owned most of their debt," he says with a laugh, "so now they work for us." Cue audience laughter.
THINK BEFORE YOU VOTE!
#rgk
Posted by Robert Glenn Ketchum at 7:19 AM No comments: