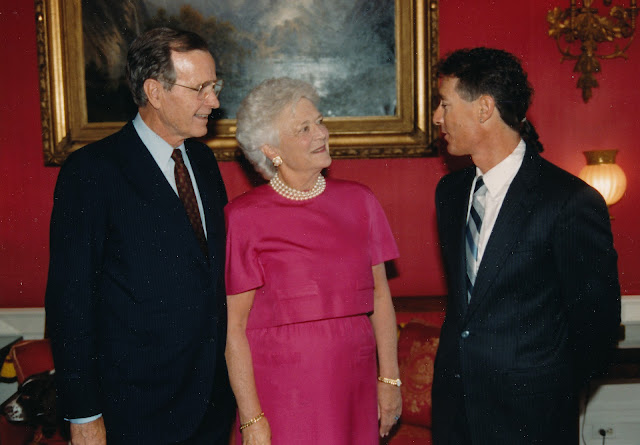 In 1987, Aperture published my book, 'The Tongass: Alaska’s Vanishing Rain Forest', which was intended to support the proposed Tongass Timber Reform Act. In the ensuing years, I spent much time in DC, exhibiting, lecturing, and lobbying on behalf of the bill’s passage. The most significant timber reform legislation in American history passed in 1990, and was signed into law by President George H.W. Bush. He then invited me to the White House in 1991 to acknowledge my contributions to the effort. For the photo-op, I was ushered into a room to find both he and Barbara awaiting me. We “socialized” while the pictures were being taken, and even in such a brief period, I was struck by Barbara’s presence. The president and I exchanged formalities, and he made sure I knew he had seen the book and knew my story, as I would have expected on this occasion. Barbara, however, was like speaking with my mother, in spite of the fact I am sporting a mohawk, a long ponytail, and a diamond-stud earring, and I am sure she was glad I was not her son. Nonetheless, she wanted to know if I was married, had kids, took them with me, were my adventures scary, did I enjoy sleeping in tents - you know, mom stuff - not a word about the politics of the situation. I have never had anyone make me feel some comfortable, in an otherwise “stiff” situation, so thank you Barbara Bush for meeting with me that day as well, and may you rest in peace.

To further this story a bit, I brought along my newest Aperture book, Overlooked In America: The Success and Failure of Federal Land Management which I gave to the President during the photo-op. Given the title of the book, and the nature of my politics, the President smiled broadly for a picture holding the book, and then put it aside. After speaking with me for awhile, Barbara turned and picked it up, opening it and leafing through the pages, complimenting my pictures and asking about their locations. She was a skillful weaving of necessary Washington formality, and honest, human interest.
Posted by LittleBearProd at 5:00 PM