Weekly Post, ARCTIC: At the Cutting Edge of Climate Change (#1-100) 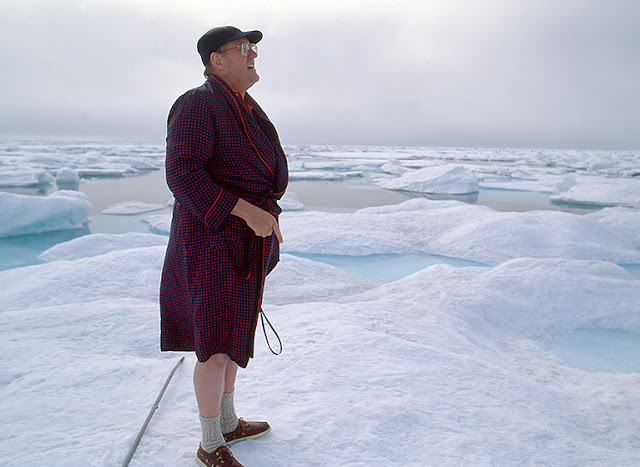 ARCTIC:  At the Cutting Edge of Climate Change, #100:
ARCTIC, #100:  Sitting in one place for several days because “Itasca” is ice-bound makes everyone (especially Bill Simon) a little stir-crazy. With the long daylight hours making time seem to go by even more slowly, there is a lot of napping and taking saunas among the guests. There is also a fair amount of alcohol consumption. John Bockstoce is SO particular about his beverage of choice, he had several cases shipped aboard, not leaving it to Bill to supply him. Now, in our lethargy of ice, he is consuming his precious rum in the morning coffee. Then, about midday, wearing only Bermuda shorts and a bathrobe, he grabs a long metal deck pole, announces he is going for a walk, steps over the lowest deck rail onto the ice, and he is off. That, in turn, sets off a frenzy. I follow him onto the ice to take pictures. Then the female staff appears in bikinis, and two of the men have a snowboard and a long rope. We are on a HUGE flow, so the guys take turns pulling each other on the snowboard, so they can say they rode at the top of the world (almost). John is wandering. I am looking for polar bears!