HELP WANTED: Hypothetical Partner for the Pebble Mine by Joel Reynolds, NRDC

HELP WANTED: Hypothetical Partner for the Pebble Mine 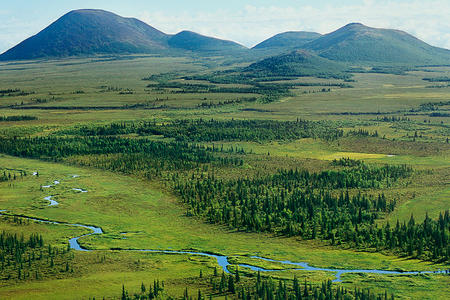 It’s no secret that Northern Dynasty Minerals (aka the Pebble Partnership)—the sole remaining partner in the embattled Pebble Mine proposed for the headwaters of Alaska’s Bristol Bay—is in urgent need of a new financial partner. To be sure, after four of the world’s major mining companies (Mitsubishi Corporation, Anglo American, Rio Tinto, and First Quantum Minerals) have walked away from the project since 2011, it’s a tough sell.

At last year’s general meeting of shareholders, Northern Dynasty CEO Ron Thiessen expressed confidence they can make a deal. The only question, he told me, is “what deal”—that is, what terms will be required to entice a buy-out or at least a new major partner. With the company’s history of failed partnerships in mind, I began to speculate about what the profile of such a partner, if indeed there is one to be found, might look like.

Here, in no particular order, are some essential characteristics:

(1) Unconcerned by financial risk
Contrary to industry practice—and despite repeated requests—Pebble has refused to release an economic feasibility analysis for its latest mine plan, now under permit review by the U.S. Army Corps of Engineers. When asked by the Army Corps’ consultant AECOM to produce information on Pebble’s “cost/feasibility,” the company refused, citing a Canadian securities regulation whose purpose is to prevent securities fraud relating to mining properties. When pressed by the Bristol Bay Native Corporation (“BBNC”) last December, Pebble’s CEO Tom Collier, too, declined, explaining that such an analysis “remains on our to-do list.” Just this month, pressed by E&E News, he demurred once again because “an economic analysis is not a required piece of the permitting puzzle.”

But there is a more likely, more compelling explanation:

Based on publicly available information and Northern Dynasty’s own assumptions in a 2011 feasibility analysis of potential mine scenarios, a former longtime Rio Tinto mining expert submitted to the U.S. Army Corps of Engineers his own analysis of the project’s economics, concluding that the project is “almost certainly not economically feasible,” with a strongly negative net present value of -$3 billion.

(2) Unconcerned by relentless opposition in Alaska
As each of the major mining companies that abandoned the project learned the hard way, the people who live in the region don’t want the Pebble Mine. There is overwhelming local opposition, registered for years, by Yup’ik, Dena’ina , Alutiiq and other indigenous peoples, and a survey released by BBNC found that 81 percent of its native shareholders strongly oppose the mine. In addition, more than 80 percent of Bristol Bay residents and 85 percent of commercial fishermen in Bristol Bay oppose the mine.

(3) Unconcerned by harm to the greatest wild salmon fishery on Earth and the region’s economic engine
After three years of twice peer-reviewed scientific study, as well as public comment that supported EPA’s process by a staggering 98 percent (and 84 percent from Alaskans state-wide), the U.S. Environmental Protection Agency (“EPA”) concluded in 2014 that the proposed mine would result in “significant and unacceptable adverse effects” to important fishery areas in the Bristol Bay watershed, that the Pebble Mine would have "significant" impacts on fish populations and streams surrounding the mine site, and that a tailings dam failure would have "catastrophic" effects on the region.

Against this scientific record and all common sense, Pebble disagrees, suggesting to its captured investors and credulous federal regulator that gouging a massive open pit mine into the tundra at the top of Bristol Bay’s watershed may be good for the fishery (from Pebble’s Collier to BBNC in December—citing “our sophisticated models”—the project will have a “potentially positive impact on fish habitat . . .”; and from Northern Dynasty’s Thiessen at last year’s Annual General Meeting of shareholders, the value of the Bristol Bay fishery will “actually be enhanced” by development of the Pebble Mine).

(4) Unconcerned by political risk that Trump Administration approval would be reversed by a future Administration
It is undeniable that former EPA Administrator Scott Pruitt threw the Pebble Mine a life-line when, in May 2017, after a one hour meeting with the project’s CEO, he announced, in disregard of the multi-year scientific process described above, that the agency would abandon its efforts to limit the size, scope, and risk associated with the Pebble Mine. Science and advice from agency technical staff had nothing to do with his decision, since he apparently consulted neither.

By contrast, in December 2017, former EPA Administrators for Presidents Nixon, Reagan, George H.W. Bush, and George W. Bush joined with former Interior Secretary Bruce Babbitt in condemning the Pebble Mine as “fundamentally flawed” and the “wrong mine in the wrong place.”

The previous year, in September 2016, the World Conservation Congress, including representatives from over 120 nations, virtually unanimously urged the U.S. government to deny a permit for the Pebble Mine.

(5) Unconcerned by partnering with a company that has a long history of failed partnerships
Northern Dynasty was created to develop the Pebble Mine, and it has no other assets. In 2010, it had a formidable list of partners and major mining company investors. All have left the project—Mitsubishi in 2011, Anglo American in 2013, Rio Tinto in 2014, and First Quantum Minerals in 2018. Since 2011, Northern Dynasty has itself been trying unsuccessfully to sell its own interest in the project.

(6) Unconcerned by generous compensation levels of Pebble’s corporate leadership despite consistently poor corporate performance
While Northern Dynasty’s stock has declined steadily in value from over $21.00 per share in 2011 to less than $0.60 per share today, Pebble’s corporate leadership continues to be very well compensated, especially Pebble Partnership CEO Tom Collier. In 2017, for example, Collier received total compensation of CAN $2,357,744 and stands to gain a US $12.5 million bonus upon early completion of the Army Corps permitting process. That same year, Northern Dynasty CEO Ron Thiessen received total compensation of CAN $2,118,486, and the company’s Chairman of the Board Robert Dickinson was compensated CAN $339,570.

(7) Unconcerned by a wide range of significant reputational and other risks, including the risk of protracted litigation
For over a decade, the Pebble Mine has been the focus of relentless opposition led by the people of Bristol Bay, supported by a wide range of state-wide, national, and even international stakeholders that includes the commercial and sport fishing industries, conservation groups, sportsmen, hunters, and businesses.

This diverse opposition has steadily increased public awareness and state, national, and international condemnation of Pebble, and it has committed to pursue all administrative and legal challenges for as long as it takes to defeat this uniquely reckless and irresponsible mining project.

(8) Unconcerned by operational risks and remediation costs
The multi-billion-dollar cost to construct the massive open pit and operate the mine – still undefined by Pebble for its current mine plan – has almost certainly been underestimated. But without question the technical challenges of construction and operation in the remote, hydrologically complex, and seismically active upper Bristol Bay watershed would be enormous.

In addition, to transport gold and copper from the mine site to market, Pebble will have to construct and operate massive infrastructure, including a marine terminal in Cook Inlet, roads, pipelines and even infrastructure in Lake Iliamna to support a preposterous southern all-season ferry route across the lake through pristine wilderness to Amakdedori Beach on Kamishak Bay in Cook Inlet. To construct roads, Northern Dynasty Minerals must acquire access rights from area landowners—access rights that some of these very landowners have vowed to oppose, including BBNC.

The list could go on. But the range of significant obstacles to, and risks of association with, the Pebble Mine is unprecedented – financial, social, environmental, political, reputational, regulatory, legal, and operational.

And while, as Northern Dynasty’s Thiessen has said, there may indeed be a financial “deal” to be made to perpetuate this international pariah of a mining project, there can be no doubt that any new partner or major investor will inevitably and deservedly be tarred with the global condemnation that, more than any other mining project anywhere, has justifiably been focused on the Pebble Mine.

We will never relent in our support for the people of Bristol Bay in defense of their way of life, their children, and their future.

Take action now.
Posted by LittleBearProd at 11:00 AM No comments: