I didn't expect the Pebble Mine would outlast Bobby Andrew. He was a fighter who never seemed to get tired. Over 70 years old, and he was always willing to make the trip - whatever the trip, wherever it took him -- to talk, to testify, to tell the terrible story of the uniquely reckless scheme by international mining giants to poison the communities and wild salmon fisheries of Alaska's Bristol Bay with a gigantic copper and gold mine.

At the age of 72, Bobby died last month, and the traditional Russian Orthodox 40th Day service occurs this week, when his soul is released from the Earth. When he talked, people listened, because there was no denying his personal stake, his authenticity, his legitimacy in representing the people of Bristol Bay. He was a Yupik elder and a member of the Ekwok Tribe, longtime spokesperson for Nunamta Aulukestai, a life-time subsistence and commercial fisherman, born in Alegnagik, near Dillingham -- and he looked the part. The determined and immovable opposition of Alaska Natives to the Pebble Mine was reflected in his face -- serious, resolute, even angry - and he was repeatedly featured in full page ads around the world as the face of the regional coalition against the Pebble Mine.


But Bobby Andrew didn't just look the part. He could talk chapter and verse about all aspects of the project or its impacts, and he wasn't afraid to have that conversation with anyone - a state official in Alaska, a federal regulator at the Environmental Protection Agency, a member of Congress on the Hill, or the CEO of a multi-billion dollar international corporation. And when he spoke, he did so not in anger but with conviction, a gentle firmness, and an easy smile that disarmed rather than threatened. Even his opponents couldn't help but like and respect him, because he was the genuine voice of Bristol Bay, unquestionably prepared to fight to the bitter end if necessary to oppose a colossal injustice.
I didn't know him well; I met him for the first time in the fall of 2009 at a meeting in King Salmon. But during the years since, I had the privilege of joining forces with him in Los Angeles, in Washington, D.C., and in London. Each April, along with a small group of regional and coalition leaders (including Nunamta, BBNC, Earthworks, and BBRSDA), we went to London to meet with the CEOs of the Pebble mining giants based there (and their management teams) and then testify at the companies' annual shareholder meetings.


We did our best to have some fun along the way - on a couple of restaurant outings, for example, using the London Financial Times ad featuring Bobby's image to secure a free bottle of wine for the visiting Alaskan celebrity, travelling half-way around the world to defend his home.
But it was generally unpleasant work, because the low income communities victimized by the massive projects of the world's major mining companies are consistently secondary among the priorities that determine whether a project does or does not proceed - and if it does, how its impacts are managed. It's a very long way to travel from Alaska, even for someone with the most personal stake in the subject matter, only to feel marginalized by the process, managed like a troublesome outsider, immersed in corporate condescension.
Bobby was undeterred, refusing to be worn down, refusing to be ignored, until ultimately the mining giants decided that he and his coalition colleagues weren't going away. In fact, through his consistent presence, the mining executives grew to respect him -- even like him -- with his easy smile and soft voice; then, remarkably,they began to listen to what he had to say.


Eventually, for a host of reasons, these executives decided that maybe the opposition wasn't all wrong about the Pebble Mine - understanding over time that the social license they had hoped to achieve from the communities of Bristol Bay might never be forthcoming, that the broad-based opposition of Alaskans (and their growing list of allies) would only continue to intensify. 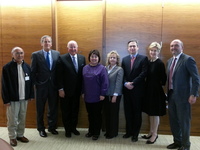 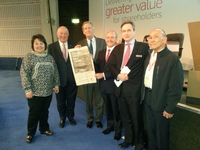 photograph © copyright, Natural Resources Defense Council 2015@NRDC @LittleBearProd #LittleBearProd
By April 2014, all of the major mining companies had abandoned the Pebble Mine, leaving the small Canadian company Northern Dynasty Minerals to carry on alone as the once formidable Pebble Partnership -  with too little funding and no realistic chance of developing the project. The fight isn't over, of course, because there always seems to be enough money to hire lawyers and lobbyists, paid to make it appear that their client still has a pulse. But no one can dispute that the venture is only a shadow of its former self, and Bobby Andrew is one of the important reasons why.

The Pebble Mine is, after all is said and done, the best example of the worst the world has to offer - a reckless scheme by international miners to enrich themselves by impoverishing the people, the children, and the communities of Bristol Bay. While the mining giants and their distant shareholders get the profit, Alaska gets the toxic waste -- forever.


Thanks to Bobby Andrew and the extraordinary coalition of diverse interests for (or with) whom he spoke so effectively, that scheme is on life support today. But terrible ideas like the Pebble Mine are hard to kill definitively, and, though Bobby has been gone for 40 days, his legacy remains in the steadfast and relentless commitment of his coalition partners, both in the region and elsewhere, to carry on the fight for as long as it takes.

From all of us at NRDC, thank you Bobby. We'll never forget you.

Posted by LittleBearProd at 8:15 PM