"A CALL TO ACTION: 115th Congressional Assault on The Tongass National Forest", The Boat Company

A CALL TO ACTION: 115th Congressional Assault on The Tongass National Forest

We are living in a time of unprecedented attacks on both public lands and waters, and the agencies that protect them. Without action on the part of all Americans, Republican and Democrat, we stand to lose much of the conservation legacy that has been achieved over the 38 years since The Boat Company was created, not just in Southeast Alaska, but everywhere. And it is no coincidence that this legislation is all coming out rapid fire – the flood of new legislation, not seen in six years, is designed to make it more difficult to meaningfully respond to or organize around any one proposed law.
We know how overwhelming it can be to process and keep up with the assault by the 115th Congress on our public lands and waters. Below you can find ongoing updates on proposed legislation that would impact our environment in Southeast so that you, our other guests, can stay informed and that we can work together to take-action.

H.R. 229 – Unrecognized Southeast Alaska Native Communities Recognition and Compensation Act – Introduced by Congressman Young, this bill would amend the Alaska Native Claims Settlement Act to allow Native communities in the towns of Haines, Ketchikan, Petersburg, Tenakee and Wrangell to organize as urban corporations and select up to a total of 115,000 acres of land from the Tongass National Forest, including selecting those lands previously designated by Congress for perpetual protection as legislated Land Use Designation II (LUD II) Management Areas, which were previously protected in order to ensure they retain their roadless nature and wildland characteristics.

H.R. 513 and S. 131 - Alaska Mental Health Trust Land Exchange Act of 2017 –Alaska’s Congressman Young and Senator Lisa Murkowski sponsored these identical bills to fasttrack an exchange of Alaska Mental Health Trust lands with substantial public safety concerns and high community use values for productive timberlands on the Tongass National Forest. This approach ignores the need for informed public engagement from affected communities. These bills were introduced before the exchange between the Forest Service and the Alaska Mental Health Trust Authority was finalized and seek to fast-track the land swap. The bill does not address the fundamental problem that clearcutting Southeast Alaska’s old-growth forests to generate revenue for Alaska’s mental health beneficiaries is an outdated model for revenue generation.

This Congress is avoiding public comment on their legislative giveaways by using a relatively obscure rule-making process called joint resolutions. A joint resolution is often used in the same manner as a bill. Once a joint resolution passes both the House and Senate in identical form and is signed by the President, it becomes law. Joint resolutions are also used to propose amendments to the Constitution.

In an obvious double standard, the majority in the 115th Congress are short-circuiting their own rules to pass new laws that favor shortsighted corporate interests. Several new bills demand the use of cost-benefit accounting in implementing regulations. Meanwhile, the 115th Congress has stripped the Congressional Budget Office of its ability to assess the real costs of the proposed legislation. 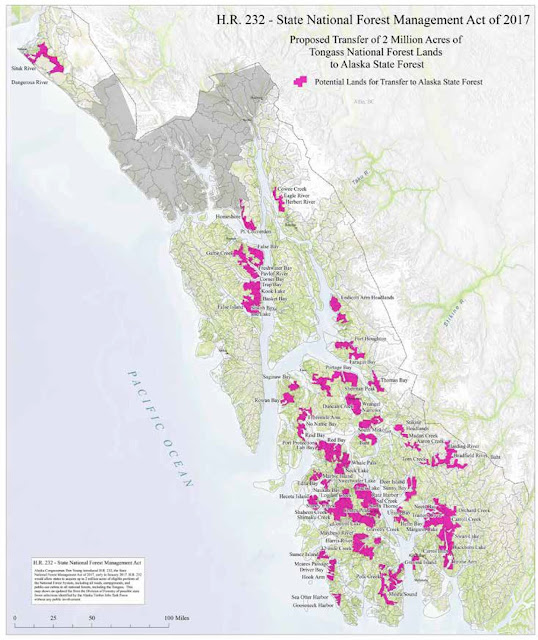 Click Here to read the H.R.232 bill in its entirety, followed by all of the phone numbers for Congress. We urge you to help us take efforts to protect these areas.

In 2012, without public disclosure or involvement, the industry-heavy Alaska Timber Jobs Task Force identified a preliminary list of possible State Forest selections from the Tongass National Forest for clearcutting. These lands have long been important to Alaskans and Nature-based Tourism for hunting, fishing, recreating, and making a living.

As a federally managed forest, the U.S. Forest Service must manage for balanced multiple-use, including outdoor recreation, hunting, and fishing. Under H.R. 232, states must manage acquired lands “primarily for timber production.” Such a timber-first approach to forest management will cost the state millions and harm the thriving sectors of Southeast’s economy, tourism and fishing. In this era of $3 billion state deficits, Alaska needs to invest in education, public safety, and other critical state programs and not in a money-losing timber program.

The Tongass National Forest is a national treasure; home to the largest intact temperate old growth rainforests left on earth, world-class salmon runs, and thriving fishing and tourism industries. Each year these industries bring in over $2 billion to the region. With both industries reliant upon a healthy forest, the impact of clear-cut logging on the economy would be disastrous.

The remaining old-growth stands on the Tongass provide critical habitat for Sitka black-tailed deer, coastal brown bear, Alexander Archipelago wolves, and goshawks. One of the most productive fisheries in the world, the Tongass is home to all five species of wild Pacific salmon that spawn in the 13,000 miles of rivers that course through the forest. Vast tracts of old-growth forests and a cool maritime climate combine to make the Tongass a globally significant carbon storage reserve, storing ten times more carbon than the next largest National Forest.

Under H.R. 232 the public is given no opportunity to influence or have a say over which lands the state selects. These are your lands, the lands of the people but will not be governed by the people. Now is the time for you to have your say.

Click Here to read that we have listed every member of congress. Please call your member and tell him/her to protect our National Forests, our economy, and the Tongass National Forest. We also encourage you to call Congressman Don Young and Senators Lisa Murkowski and Dan Sullivan of Alaska and let them know that the Tongass is valuable and should be left alone and not cut. 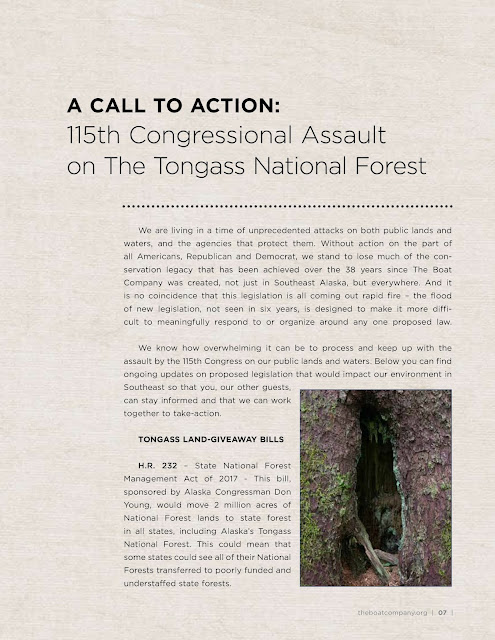 Posted by LittleBearProd at 2:30 PM